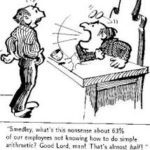 The PMBOK® Guide and most modern management texts emphasise the importance of leadership and motivation over directive control.  This is for a very good reason, as modern management evolved during the Industrial Revolution, the function of most workers was to ‘man the equipment’ to literally keep the wheels of industry turning.  In the 21st century, most businesses equip the person with computers and other tools to allow them to work creatively and efficiently. The regimented discipline of the industrial age which required a bobbin to be changed on a loom within seconds of the cotton running out or breaking is no longer needed and is counterproductive if the 21st century organisation is focused on creating new knowledge or systems (eg, software development) or on customer service.

Fredrick Taylor was probably the last management writer to advocate strict management control over the workers in his books and papers describing ‘scientific management’. By 1914, Henry Gantt, a contemporary of Taylor, was advocating training and motivation as the keys to increased productivity, describing the ‘old school’ managers who focused on regimented discipline, underpinned by the fear of dismissal or penalties ‘driving managers’[i]. By the 1950s Peter Drucker was defining this old fashioned management approach as outdated ‘command and control’, highlighting the ineffectiveness of the managers who still tried to use19th century approaches based on fear and intimidation to enforce their authority over subservient underlings. Drucker was probably the first person to recognise the concept of ‘knowledge workers’ and to understand managing knowledge workers needed a completely different management paradigm.

Unfortunately more than 60 years later, far too many managers still tend to use an authoritarian management style despite the ineffectiveness of this approach being demonstrated since the beginning of the 20th century. In the age of knowledge work ‘command and control’ is highly counterproductive. It is simply an act of futility to tell a person she MUST come up with a bright idea to solve a problem within the next 30 minutes or sanctions will be applied! Fear damages creativity and destroys openness; frightened people cannot work effectively in a ‘knowledge economy’.

These ideas in the 1980s W. Edwards Deming published his 14 key principles for management.  Principle #8 is: Drive out fear, so that everyone may work effectively for the company.  If people are people are fearful of being ‘blamed’, the last thing they will do is pass on accurate information about an issue or a problem. Whilst everyone is happy to pass on ‘good news’, management access to high quality information only occurs if the people in the organisation also feel it is safe to pass on the ‘bad news’ that identifies problems that actually need management input and assistance to resolve – you cannot solve a problem you don’t know exists……

Effective management decision making depends on the open transmission of ‘bad news’. Project controls staff need to know what is really happening and need honest estimates of future consequences to provide ‘planning advice’.  Team members with a problem need to be able to ask for help early rather than waiting until the issue becomes ‘big and obvious’.

To understand how serious this problem can be, one of the causes of the ₤425 million loss so-far on the ₤2.4 billion U.K. Universal Credit program, caused by ‘weak management, ineffective control and poor governance’, was that no one in the development team felt able to highlight their problems to senior management. Fear of being blamed kept the knowledge of the problem from the people who needed to know[ii].

The solution to this problem is contained in Point 10 of Deming’s principles: Eliminate slogans, exhortations, and targets for the work force …. Such exhortations only create adversarial relationships, …… substitute leadership!

Trusting and empowering your team, open communication, leadership and motivation are all closely interlinked and in combination create high performance tams. This is not a new concept; the Prussian military developed the concept of auftragstaktik at the beginning of the 19th Century with its core tenet of ‘bounded initiative’. Provided people within the organisation hierarchy have proper training and the organisational culture is strong, the leader’s role is to clearly outline his/her intentions and rationale. Once this is understood, subordinate personnel can formulate their own plan of action for the tasks they are allocated and design appropriate responses to achieve the objectives based on their understanding of the actual situation, exploit opportunities and mitigate problems[iii]. Ever earlier, Chinese philosopher Laozi said “A leader is best when people barely know he exists. When his work is done, his aim fulfilled they will say ‘we did it ourselves’.”

What these ideas mean for project managers is to:

This is a different paradigm to old fashioned ‘command and control’, but one that has been proven to be far more effective in many different situations during the last 100 years.

If surveys of employees are to be believed around 70% of managers are still operating in a ‘command-and-control’ mode relying on authority, discipline and ‘fear’ to drive performance and their team’s commitment to the organisation and performance suffer accordingly. So the key question from this post is are you up to the challenge of managing in the 21st century by eliminating the ‘fear factor’ from within your team?

[i] For more on the work of Henry Gantt see: http://www.mosaicprojects.com.au/PDF_Papers/P158_Henry_L_Gantt.pdf

[ii] The saga Universal Credit saga is on-going, the Report for the UK National Audit Office: http://www.nao.org.uk/report/universal-credit-early-progress/ at Reference 3.23 states in part: The culture within the programme has also been a problem. The Department intended to ring-fence the Universal Credit programme from cost savings being made in other areas. It decided to deliver the programme through a single delivery organisation within the Department. Both the Major Projects Authority and a supplier-led review in mid-2012 identified problems with staff culture; including a ‘fortress mentality’ within the programme. The latter also reported there was a culture of ‘good news’ reporting that limited open discussion of risks and stifled challenge.