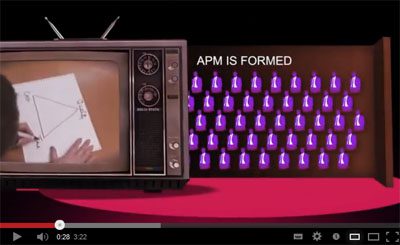 Marking APM’s 40th anniversary the History of project management video celebrates four amazing decades of the profession. Narrated by APM president Dr Martin Barnes CBE, this short film takes you on a journey through the most significant projects over the last forty years and showcases how integral project management was to their success.

Project management has come a long way since the creation of APM in 1972. It is a profession that is still thriving and driving towards a world in which all projects succeed. That is something every project manager should be proud of. To show how great this profession has become and the potential it still has please pass this video on to your colleagues, clients and customers.

The video, part of a yearlong series of events and activities to mark APM’s 40th anniversary, was premiered at the APM Awards 2012 last Thursday. The most prestigious night in the professional calendar has been awarding project management excellence for 19 years, so it was fitting that the APM Awards 2012 should be the culmination of such a momentous milestone for the association.

Not only is 2012 the anniversary year of APM, it was the year of the London Olympics. The Olympic Delivery Authority were responsible for one of the most significant and successful projects of our time. Their construction programme of the Olympic Park, from which APM helped to disseminate the lessons learned through a learning legacy series of events, was the driving force behind their success at the evening’s ceremony by walking away with three awards.

Showcase your own project

Celebrating success in our profession is something we should all be proud of, no matter how big or small a project may be. From creating the platform for the sporting event of the year to consolidating a university’s range of online tools into one cloud-based service, every project has its unique challenges.

That is why APM celebrated with the entire project and programme management community by building up a snapshot of the profession and its achievements throughout 2012. My Project, a photographic collection of projects and programmes from all over the world, has built a fascinating picture of the profession in action, and is still growing. Have a look through the fascinating gallery on the association’s new Pinterest vision board. If you feel inspired, please submit your own picture and description to myproject@apm.org.uk

The past year has been an incredibly busy, but an enjoyable one for APM. This momentous year saw a revamp of the APM Conference. It was held on a new date, at a new venue with a stellar line-up of speakers. A plethora of Honorary Fellows have been announced throughout the year and during May, the same month in 1972 when APM was formed, a special anniversary edition of Project magazine was published. Furthermore, a special anniversary edition of the members’ newsletter Network was published in June.

APM worked in conjunction with Skills CFA to develop the Higher Apprenticeship in Project Management, which is equivalent to the first year of a degree course. The aim is to create new pathways into the project management profession, improve the management of projects and embed vital project skills in organisations throughout England.

2012 has proven to be an unforgettable year with plenty of success. As APM continues to work with the project management community in driving the profession forward, imagine where we’ll be in another forty years.